I’ve already ordered the bath, but If I hadn’t I’d be looking at these. Stunning and recycled materials 🙂

Looking at the details in the PDF, a lot of the ideas are similar to those being used by ecofab for my project:
– see some screen grabs below.

WikiHouse has released the design for a £50,000 printed house for the UK that could help tackle problems like urbanisation, climate change and inequality, say creators.

The design is the latest creation from the non-profit project that has been developed to help produce low-cost, high-performance houses that are suited to local needs.

The project, called WikiHouse, is an open source construction system which makes it possible for anyone to design, share, download, adapt and ‘print’ houses.

Users of the system can ‘print’ house parts from a standard sheet material like plywood, and the main structure assembled in about a day without the need for conventional construction skills, say creators.

“The open secret is that in reality almost everything we today call architecture is actually design for the 1%,” said WikiHouse co-designer Alastair Parvin of London-based design studio 00.

“The challenge facing the next generation of architects is how, for the first time, we will make our client not the 1% but the 100% – to radically democratise the production of architecture.”

He added: “We are moving into a future where the factory can be everywhere – and increasingly the design team can be everyone.”

WikiHouse is currently under development, with a growing community of teams and is seeking collaborators and funders. 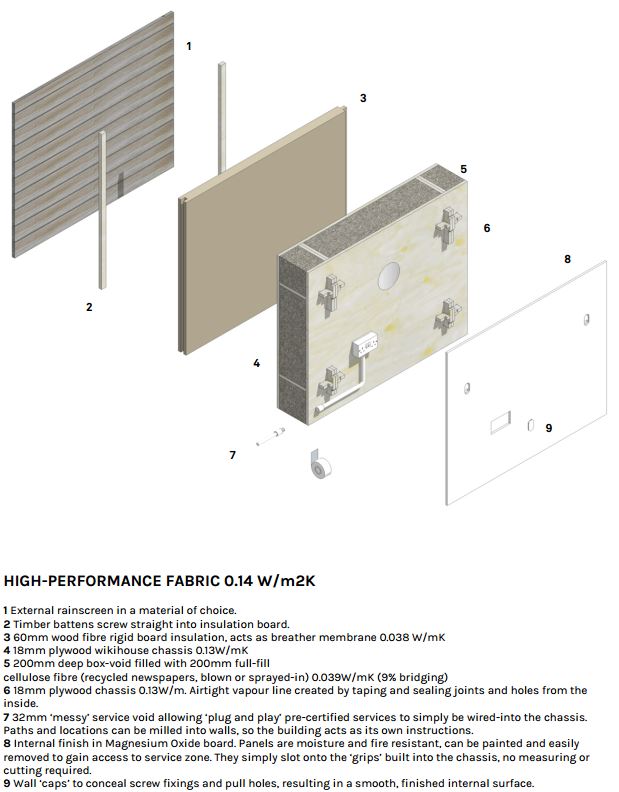 Some models are carbon neutral. European woodstoves using the Nordic Ecolabelsystem are so efficient that the carbon emitted when they’re used properly is equal to the carbon a tree naturally emits while decomposing in the forest.

This article at http://www.building4change.com/page.jsp?id=1444 on “Whole house shutdown” says that:

A system that allows home occupants to conveniently and reliably turn off power to non-essential electrical items while they sleep or leave the house could cut household CO2 reductions by almost a fifth. This finding emerges from a study of technologies that could influence a reduction in energy consumption and associated CO2 emissions for a typical home built in 2016, carried out by NHBC Foundation.

It looks like there is a new player in the UK market. OR one that I’d not previously spotted!

They have a good few shower tray / under shower options and those that can be more centrally integrated into your whole property hot water system.

Our most popular waste water heat recovery system due to it’s great efficiencies, low price and superb all round performance. Ideal for new build applications, this product is sure to deliver results, whatever your criteria.

Our tray is the perfect solution for apartments or ground floor en-suites. Achieving code in city apartments without renewables is notoriously difficult; this shower heat recovery system with flexible tray size is the answer that doesn’t cost the earth.

Building a wet room or have access issues? The Recoup Drain+ provides a great option. Finished in stainless steel and offering 50% efficiencies, this is a must have system for your self build or walk-in shower.

This compact WWHRS is easy to install, easy on the pocket and easy to maintain! As it’s name suggests, it’s ideal for retro-fitting in domestic and commercial properties. A very cost effective way to achieve efficiencies of up to 22%.

A system with great efficiencies specifically designed for large developments with good water pressure. This single walled exchanger provides up to 68% efficiency, so will tick a box for the Technical Director or architect looking for a cost effective solution to achieve code.

Good result for the UK.
– it seems we are doing the same, with less energy than other large economies 🙂

The report shows there is, as you’d expect, plenty of scope to do better. But, for me, this is a great start.

“Comprises of three compartments and a central bottle crusher to compress your waste with ease.”

“Made from recycled plastic”

“Each compartment has a door for bag removal and a small upper opening with a cover for waste deposit. The covers close tightly so that bad odours cannot escape.”

“Standard supermarket shopping bags can be inserted into each of the compartments for ease of use.”

Treehugger.com had an article on this prototype system that combines hydroponics and a fish farm into one unit for all year round veggies and a few fish.

The prototype Globe/Hedron “is a bamboo greenhouse designed to organically grow fish and vegetables on top of generic flat roofs. The design is optimized for aquaponic farming techniques: the fish’s water nourishes the plants and plants clean the water for the fish,” according to designer Antonio.

I’ve got some ideas for a table made from recycled wood and maybe recycled steel. The more of the house (build, materials AND furniture) can be recycled:

So great to come across St Austel based www.sustainable-furniture.co.uk who also have a showroom in Truro.

I’m going to have a problem, sorry challenge.

The sliding doors from the planned living room at the bottom are due to be around 2.8m tall.

This is taller than most companies produce triple glazing. In part due to the total weight of the glazing units.

Triple glazing gives better insulation, and less thermal gain. But as this is north facing, the solar gain isn’t an issue.

BUT, how much more expensive is triple glazing and how much better is it ?

The key benefits are really to do with comfort. If you insulate the walls, roof and floor of a house, and you ignore the glazing, you end up with cold spots surrounding the windows at night, which cause draughts, draw heat away from you if you sit next to them, and can result in streams of condensation running down the panes. So, in essence, the standard of glazing has to match the standard of the insulation elsewhere in the house, so that the warm wrapping around the house performs consistently.

The PassivHaus Institute, in Germany, has looked at the surface temp­eratures on various forms of glazing when it gets really cold outside, and the internal air temperature is designed to be at 21°C:

So whilst triple glazing may make little difference to your heating bills, you will notice the difference inside the house.

BUT, this is all based on the situation in Germany, where it’s a lot colder than the UK. Cornwall is itself a relatively warm bit of the UK.

The upshot of this is that there are many who argue that triple glazing simply doesn’t make sense in a climate like ours. Triple glazing is more costly to produce, produces much heavier sections and has an embodied energy approximately 50% higher than double glazing.

An alternative option that might make more sense is to revisit the traditional practice of drawing curtains across windows after dark. It may be low-tech, in comparison with glazed cavities filled with krypton, but it’s something of a natural British habit and it does cut down on heat loss. Perhaps it’s time we paid attention to improving the heat retention characteristics of curtains and blinds, rather than continuing to engineer glazing units to ever lower and lower U-values.